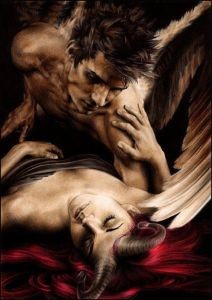 Daughter of Smoke and Bone

Around the world, black handprints are appearing on doorways, scorched there by winged strangers who have crept through a slit in the sky.

In a dark and dusty shop, a devil’s supply of human teeth grows dangerously low.

And in the tangled lanes of Prague, a young art student is about to be caught up in a brutal otherworldly war.

Meet Karou. She fills her sketchbooks with monsters that may or may not be real, she’s prone to disappearing on mysterious “errands”, she speaks many languages – not all of them human – and her bright blue hair actually grows out of her head that color. Who is she? That is the question that haunts her, and she’s about to find out.

When beautiful, haunted Akiva fixes fiery eyes on her in an alley in Marrakesh, the result is blood and starlight, secrets unveiled, and a star-crossed love whose roots drink deep of a violent past. But will Karou live to regret learning the truth about herself?

Once upon a time, an angel and a devil fell in love.
It did not end well.

Right of the bat, I was immersed into Karou’s world, which is as colorful as her natural bright turquoise hair. She is an exceptionally gifted artist, living in Prague, and what she draws or paints, breathes like it is alive. Damn, even I am writing like poetry now and that is the effect this book had on me.

Karou is raised by a set of mysterious, out of the world creatures she doesn’t fully understand, though they are the normal of her life – a horned half man she calls Brimstone, a half snake half woman Issa, and a few others. She straddles two worlds, the human one and the other one where her mysterious family belongs.

She runs errands for Brimstone in return for small wishes. And like all mature seventeen year olds, uses them for mature far reaching purposes like an itchy crotch for her ex-boyfriend. Sometimes, even going to an extent to giving her ex boyfriend’s current girlfriend bushy eyebrows.

She has a mostly normal familial relationship with Brimstone, who in turn is taciturn, strict and sometimes scary. But he cares for Karou in his own way. Even if we know early on that he is a demon, their conversations are pretty standard for a seventeen year old rebellious teen and their maybe parent figure.

“I don’t know many rules to live by,’ he’d said. ‘But here’s one. It’s simple. Don’t put anything unnecessary into yourself. No poisons or chemicals, no fumes or smoke or alcohol, no sharp objects, no inessential needles–drug or tattoo–and…no inessential penises either.’

‘Inessential penises?’ Karou had repeated, delighted with the phrase in spite of her grief. ‘Is there any such thing as an essential one?’

‘When an essential one comes along, you’ll know,’ he’d replied.”

The story takes a massive turn when Brimstone sends Karou on a dangerous quest in Marrakesh, more dangerous than the regular ones. The colorful story starts getting deeper. In the middle of a busy town square, Karou comes face to face with her past, her present and her likely future. She sees Akiva, and immediately knows he is not human, knows he is not even one of her friendly family demons. Her body works against her instinct and wants to get away from him.

“Until a few days ago, humans had been little more than legend to him, and now here he was in their world. It was like stepping into the pages of a book — a book alive with color and fragrance, filth and chaos — and the blue-haired girl moved through it all like a fairy through a story, the light treating her differently than it did others, the air seemed to gather around her like held breath. As if this whole place was a story about her.”

All is not unicorns and rainbows. War is brewing. And this war will expose all that was until hidden from Karou’s mostly human eyes. A war that at once destroys her world and remakes it into something she couldn’t have lived without if she knew. Intrigue and mystery and layer by layer the history of Akiva and Karou unfolds and grips the reader like a vise.

A rather huge secret (and plot point) is revealed. (I won’t tell! Read the book for it.)

Sides are picked. The oldest foes come again at arms against each other. Questions are asked, such as, does being born a monster make you one or does choosing to fight a holy war and massacre hundreds make you an angel? What is evil and what is good and what makes us one or the other? Is it our family or Our upbringing or Our choices or simply having the wings or blue hair makes you one? If both light and dark are the two sides of the same coin then what gives one the right to vanquish the other?

“Have you ever asked yourself, do monsters make war, or does war make monsters? I’ve seen things, angel. There are guerrilla armies that make little boys kill their own families. Such acts rip out the soul and make space for beasts to grow inside. Armies need beasts, don’t they? Pet beasts, to do their terrible work! And the worst part is, it’s almost impossible to retrieve a soul that has been ripped away. Almost.” He gave Akiva a keen look.”But it can be done, if ever… if ever you decide to go looking for yours.”

The magic was in the storyline and its style of narration. For me, despite of all the YA tropes infused into the book, Daughter of Smoke and Bone was fresh and beautiful; also funny and gut wrenching at the same time. Woven with some pleasant surprises, which I don’t want to reveal, the book has found the premium spot on my book-shelf J.

The author Laini Taylor has a definite gift with words. The book ends at a choice and though we know what choice Karou is going to make, we are conflicted, we question our morals and we question the socially accepted norms. This for me is what elevated this book from four to five smashing stars. Lovely that this is just the first book of the series and I have more to go.

“Once upon a time, a little girl was raised by monsters.
But angels burned the doorways to their world, and she was all alone.”