Love and Decay, Vol 1 by Rachel Higginson: My Reader’s Experience 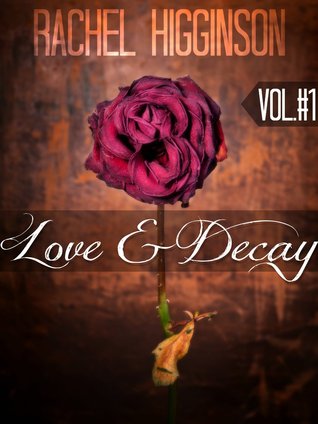 Zombies- as if that wasn’t enough to ruin any girl’s dream of a happily ever after.

A vaccination gone oh so wrong and a huge portion of the world’s population was turned into Zombies. Reagan Willow is forced out of her home when her parents become casualties of the horrid Zombie Apocalypse. With the help of her best friend Haley, they’ve become somewhat of experts on surviving the dangers of a world thrust into chaos and decay.

Reagan and Haley are on a vague mission to find somewhere safe to live out the remainders of their terrifying life when they stumble upon the Parkers, a pack of brothers that seem to have the survival thing down in a much more efficient and successful way than Reagan could ever have imagined. They are also protecting their eight year old sister, Page, and will do anything to keep her safe.

The brothers decide that Reagan and Haley need help with being kept safe as well, and as a group they set off to find the Zombie-free utopia Reagan is dreaming of.

Zombies are a daily problem, constantly threatening the lives of their group, but they’re not the only peril on the journey ahead. Militia groups of power hungry men are also a constant concern. And settlements of paranoid, suspicious people turn out to be just as hazardous.

Admit it or not, apocalypses, end of the world scenarios, destruction of the world as we know it, all of these are subjects that fascinate us all on some level. Maybe it is about a morbid curiosity of watching a train-wreck. For some of us, it may be because of a doom and gloom kind of personality. Or maybe, the subject is so fantastically impossibly probable, that we can’t help but think about it every once in a while.

Love and Decay by Rachel Higginson is a dystopian drama, set in a world where a cure for STDs involuntarily triggered a mass infection turning humans into zombies. Right off the mark, here’s a few things that hooked me to this story-

Then there are the subtle things that beg to be thought about, as the story progresses. When more than half of the human population turns into zombies, what happens to the remaining less than half? Do they band together? Do they kill each other over precious supplies? Do they form closed cults with their own propaganda and kidnap unsuspecting survivors, then brainwash them to join in?

Case in point, as Reagan says-

“Whenever a group of just men got together it was like they lost millions of brain cells in the presence of all that testosterone. They became total cavemen, dangerous and unpredictable. They were just as deadly as Feeders, especially to women. Especially to a couple of young virgins, traveling by themselves… We were like the new Fountain of Youth. The white unicorn. The freaking Holy Grail.”

Question is, faced with the complete annihilation of society as we know it, do people become less than human or something more?

What makes us human? Coexisting in a society and being accountable for our actions through regular policing or is there something greater about us as an organic, hydro-carbon derived, intelligent species? Faced with a terrible fate, is it possible for a one in a million hero to rise up or do we all go down in ignominy?

This action packed story raises all of the above questions through the journey and misadventures of our two main characters, best friends and ex-cheerleaders Reagan and Haley. I liked these two. Sometimes they were these Rambo-esque stolen-gun-toting poker-faced superwomen and sometimes they were just two scared orphaned children who didn’t know where their next meal, next temporary shelter, next pair of shoes or next anything at all was coming from. But mostly they were Rambos, because like I said, these two chicas are not whiny. They had a sense of humor and seriously folks, a sense of humor is sometimes all that stands between hanging in there with zombie bits on your body-courtesy the dead body you just decapitated- and total mental collapse over the impossibility of survival. So the sass helped.

I went into the story expecting it to be a dark zombie book with a side of romance. I got so much more than that. As Reagan says –

“I kicked out and stabbed, kicked out and then stabbed. Wash, rinse, repeat. There was a synchronization in not getting eaten, I just had to find the right rhythm. I would keep fighting until I died. I would keep surviving until there was nothing left of me.”
“Even if the utopia we searched for didn’t really exist, our sanity lay in the hope and promise of a better life to come.”
Despite being about a zombie apocalypse, this book managed to stay sunny side up. That was good. The love story (stories), although being integral plot points, did not take away from the constant feeling of danger and doom that hung on Reagan and Haley and did not slow the pace. That was good too. The main characters evolved throughout their journey, made mistakes, learnt and faced the music and moved on to the next recital. I did feel that once or twice, they fantastically benefited from the author’s determination to keep them all alive. But oh well, that’s Rachel Higginson’s superpower anyways. She wrote a great book.
Happy Reading…
Sakshi Chopra
#Book Reviews
#Book Reviews India